Adoptive T cell therapy is being investigated in clinical trials in myeloma and other cancers.

At the moment two T-cell therapies have been approved by the Food and Drug Administration in the US; one for treating a form of Acute Lymphoblastic Leukaemia in certain children and young adults and another for treating certain types of non-Hodgkins lymphoma in adults.

In its simplest form, adoptive T cell therapy involves the patient’s T cells being harvested, stimulated to grow and expanded in an in vitro culture system. They are then reinfused back into the patient where the aim is that they will mediate tumour destruction.

One approach being tested in myeloma is chimeric antigen receptor (CAR)-T cell therapy (Figure 3). Here, harvested T cells are genetically engineered to recognise a specific protein on the myeloma cell. When reinfused back into the patient, the modified T cells start to multiply and better able to target and destroy the myeloma cells. 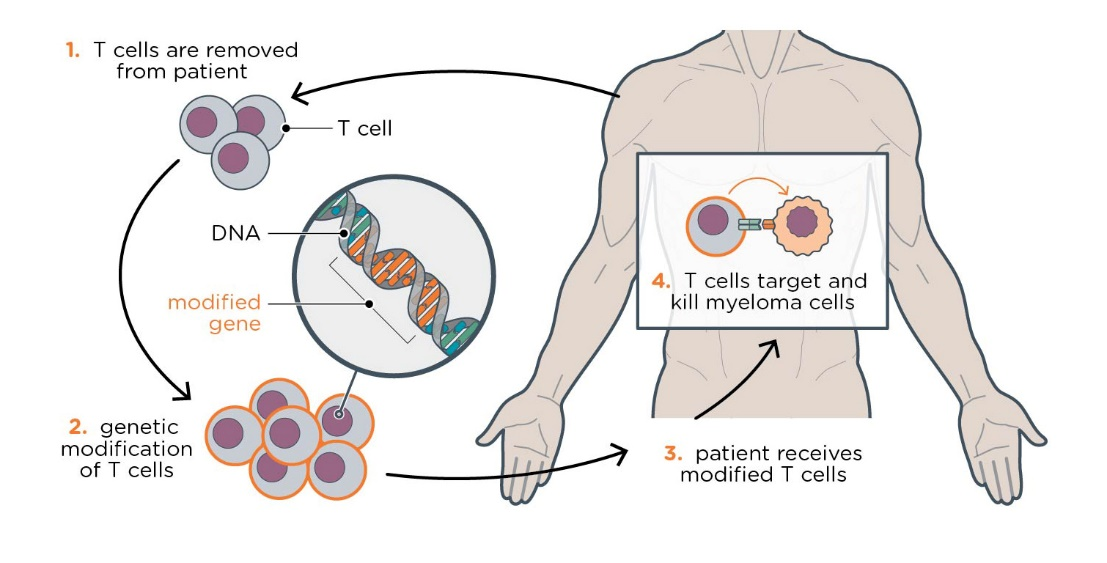 Preliminary data from a Phase I trial of a novel anti-B cell maturation antigen (BCMA) CAR-T cell therapy showed promising responses in heavily pre-treated relapsed and/or refractory myeloma patients. Investigations are continuing with this and other CAR-T cell therapies but currently it is only available in trials.

CAR-T cell therapy is a very promising type of treatment but there are still major challenges to overcome such as immune-related toxicities. Limitations of the treatment include the fact that the responses usually show limited durability.

Although monoclonal antibody treatment is effective in targeting myeloma cells, responses are of limited duration once treatment is stopped because there is no memory response to provide ongoing immune surveillance.

In an effort to address this, tumour vaccines are being explored to educate the patient’s immune system, particularly B and T cells, to produce antibodies against myeloma-specific antigens and to recognise them as foreign and create long-term memory.

Figure 4 provides a simplified schematic overview on how myeloma vaccines are being produced and how they are used to combat myeloma cells.

Figure 4: A simplified overview of the use of vaccines as immunotherapy tools in myeloma

Several vaccines are being investigated in myeloma patients both alone and in combination with other anti-myeloma treatments. These include vaccines against a number of proteins expressed on the surface of myeloma cells such as MUC-1 (ImMucin™), MAGE-A3 and PVX-410 proteins.

Oncolytic virotherapy represents a new area of immunotherapy. Oncolytic viruses can selectively replicate in and kill cancer cells without harming normal tissues. There are two main types of oncolytic viruses:

Figure 5: A schematic diagram of how oncolytic virotherapy can be used to destroy myeloma cells 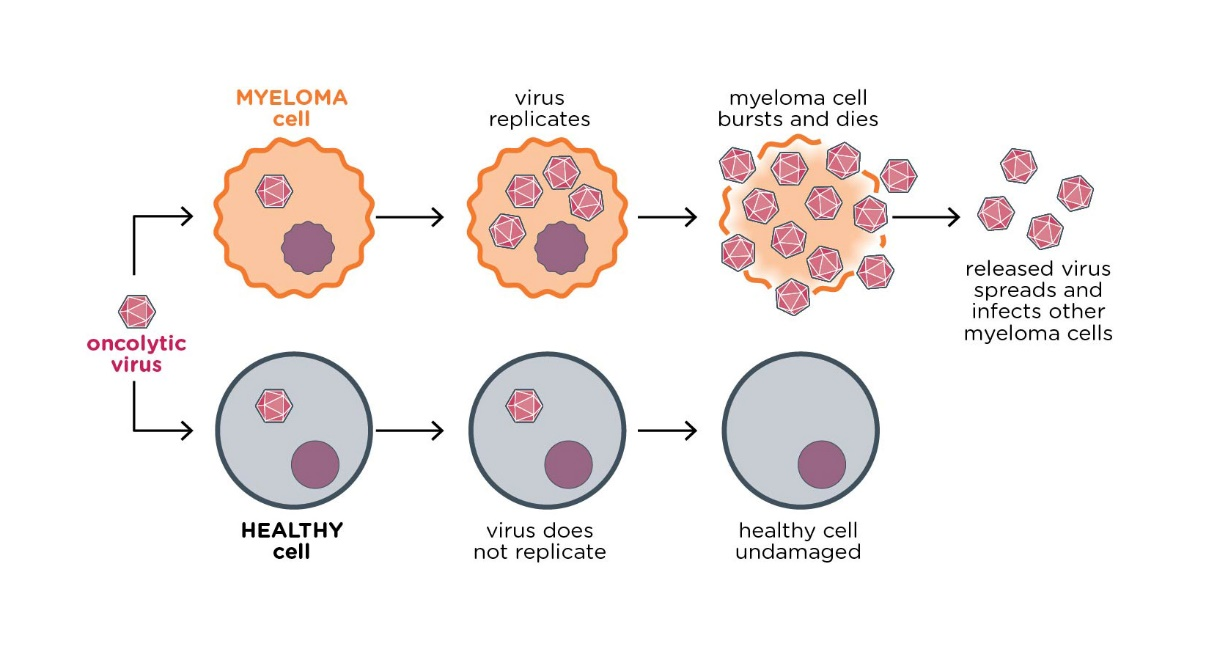 One example of oncolytic viruses being investigated in myeloma is reovirus (e.g. Reolysin®). Reolysin selectively infects and kills myeloma cells whilst sparing normal cells. At the same time, the virus stimulates the immune system to mount an immune response, which in turn may also target myeloma cells.

A Phase I dose escalation trial of Reolysin in relapsed myeloma patients has shown it is safe with no serious side-effects reported but efficacy appeared to be limited indicating that Reolysin-induced oncolysis may require combination treatment.

This is being addressed in other ongoing trials including one involving relapsed and/or refractory myeloma patients where reovirus is combined with bortezomib and dexamethasone. Another trial, MUK eleven, is examining whether administering Reolysin to patients relapsing on lenalidomide or pomalidomide can control disease progression and halt further relapse.

Dr Martin Kaiser summarises some of the newer types of immunotherapy currently in clinical trial.